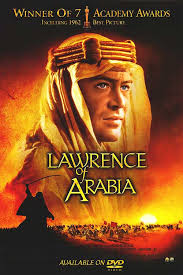 When I heard that actor Peter O’Toole died last year on December 12, 2013, I was sad. Mr. O’Toole was nominated for an Academy Award for a film called “Lawrence of Arabia.” Although the film was loosely based on T.E. Lawrence’s accounts of his time in the Arabian Peninsula during World War I, it was director David Lean’s depiction of the peoples of that area, in contrast to what at the time we considered civilized people are like, that sets the tone for misconceptions about what living in the Middle East is like. In the film, Lean depicts the peoples as warring tribes too intent on fighting over watering holes, and on petty arguments between tribes, instead of fighting for their own independence from the Ottoman Turks. The film has Lawrence giving the concept of a unified Arab nation, of tribes united under a common flag, of similar peoples with similar beliefs, and similar culture could not even be fathomed by the Arabs themselves. He also shows the people as backwards and manipulated by the smarter Europeans, whose only concern is using the Arabs as a sideshow to distract the Turks from helping the Germans on either front during World War I.

Another misconception about the people from The Middle East, that Westerners get, is from the selected footage that the news media selected to show during the Iran Hostage Crisis that began in 1979 and ended in 1981. The news media showed young college student shouting with vehemence at the United States.  Today, we see the Middle East in the news every day.  With the militant rise of the Islamic State, CNN, Fox, and even NBC gives the impression that all of the peoples of the Middle East are militant fundamentalist. That is not the case. The images from the film and the news footage have ingrained themselves into the minds of Westerners ever since.